Home / Fire / How to select a fire rated wall or ceiling

How to select a fire rated wall or ceiling

One of the most common questions we get asked is “how can one system have two different Fire Resistance Levels (FRLs) and what does each one mean?” For example a wall system can have -/90/90 and 60/60/60. Even for architects, understanding the requirements of the Building Code Australia (BCA), can be confusing. But when it comes to selecting  fire rated systems, including fire rated walls and fire rated ceilings, there is some key terminology you need to know.

For example, Fire Resistance Level or Fire Rating? What is an FRL and why are there three numbers? What are Fire Hazard Properties? What is Insipient Spread of Flame?  What is the difference between load-bearing and non-load bearing, and how does this relate to fire resistance?  In this article we explain what each one means and how it relates to selecting a wall or ceiling system.

Usually a building surveyor or certifier will specify the required FRL. It’s handy to know what they are asking for and have an understanding of the appropriate system.  To find this yourself,  go here  to use the BCA 2019 Requirements Finder and then use the Siniat System Selector.

Although commonly referred to as fire rating, the correct term to describe the fire resistance of a building element is FRL (Fire Resistance Level). The FRL is the ability of a building element to withstand a fire under test conditions for a certain period of time and consists of the three criteria listed below:

Figure 1 below shows an FRL of 60/60/60. This means that if a building element were exposed to a standard fire test, it would not be expected to fail for 60 minutes in each of the three criteria. The BCA specifies FRLs for building elements such as walls, columns, roofs and floors. These FRLs can be many combinations of the three criteria, eg. 90/-/-, 90/60/30 or -/60/60. A dash in the FRL means there is no requirement for that criterion. 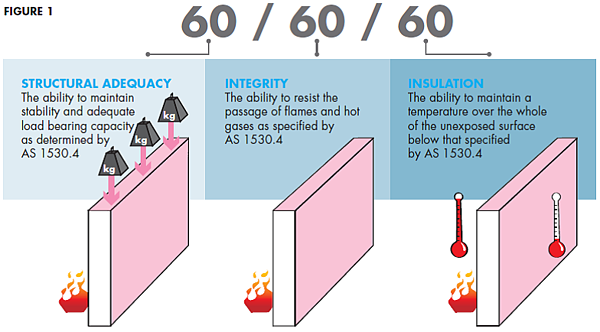 There are many ways in which an FRL can be determined. They are listed and detailed in BCA Schedule 5 and include the following:

FRLs are about how well a system of components contains a fire. Fire hazard properties on the other hand refer to a material’s properties, such as how easily it burns.

One way of reducing the effects of a fire is to use materials on the walls, floor and ceiling that don’t encourage smoke and fire.  Fire trying to spread along a concrete corridor would do so more easily if it were lined with flammable materials. Therefore the BCA regulates the fire hazard properties of coverings and lining materials in buildings according to BCA Specification C1.10.

Floor/ceiling systems or roof systems with an FRL include the roof lining or flooring as part of the fire barrier.  Ceilings with a Resistance to the Incipient Spread of Fire state the ability of a ceiling to limit the temperature rise in the ceiling cavity [shown below]. Ceilings with 60 minutes of RISF are specified by the BCA and are appropriate where the ceiling is the primary fire barrier that limits fire spread by way of the ceiling void.

An example of where this type of ceiling is required is a Class 2 residential building which has several apartments on the top floor. The apartments have fire resisting separating walls between them which finish at the ceiling under a shared roof space. The RISF 60 ceiling prevents fire spread from one apartment, up into the roof space and then down into a neighbouring apartment.

The definition of load bearing from the BCA: ‘intended to resist vertical forces additional to those due to its own weight’. Therefore walls such as those holding up a floor or roof above are load bearing. While (in general) walls that span between concrete slabs and are not holding up the slab, are considered non-load bearing.  The BCA deemed to satisfy provisions specify FRLs based on whether the building element is load bearing or not (Refer to BCA Specification C1.1). For example, walls separating sole occupancy units in a Class 2 building of Type A construction (residential high rise) need an FRL of -/60/60 if they are non-load bearing and 90/90/90 if they are load bearing. Residential high rise buildings are usually slab to slab construction in which case the concrete columns are load bearing but the plasterboard infill walls are not.

Fire resistance is a big subject but hopefully now a little better understood. If you’d like even more detail about these terms or fire rating requirements, they’re defined in the BCA which is now part of the National Construction Code; free to download.

Once you have the fire resistance requirements from the plans, building surveyor or building certifier, you can select the right system with a little more insight. Do you need structural adequacy or not? Does your ceiling need an FRL of 60/60/60 or an RISF of 60?

Don’t forget to consult the Siniat Technical Manuals (https://knauf.solutions/technical-manuals/ ) for plasterboard systems and the online Siniat System Selector or contact Siniat on 1300 724 505 or through our website and get project specific advice from one of our expert engineers.