Home / Plasterboard / Ghosts on my ceiling! How to deal with 'thermal ghosting'

Ghosts on my ceiling! How to deal with 'thermal ghosting'

Nobody likes living with ghosts, but they are not so bad when they are invisible. In terms of built structures ghosting refers to those dark and often unexplainable streaks and patches on walls, ceilings and carpets. This phenomenon, also known as thermal tracking or bridging, can be unsightly and a cause of concerns for the inhabitants. 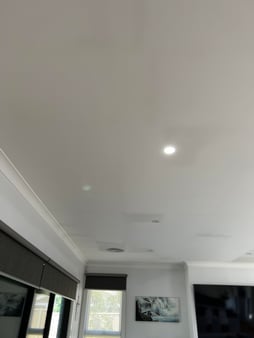 In Australia ghosting is most often seen in states with colder winters, and not regularly reported in Queensland and Western Australia.

The most common form of ghosting appears in the homes of smokers. In these homes dark outlines often remain on walls when pictures or paintings are removed after some time. Ghosting can also occur in non-smoking environments, but usually it is still the actions of the inhabitants that cause it.

Ghost marks are often confused with mould build-up, but without the telltale odour you are probably dealing with something other than mould. Some of the root causes of mould and ghosting are the same though, and those marks warrant further investigation.

Ghost spots or thermal ghosting are caused by a combination of moisture, condensation, cold spots, static electricity, air currents, and a good supply of dust, soot, and other particles drifting in the air.

Generally, there are three root causes of ghosting:

The amount of moisture that air can hold depends on the temperature of the air. As the temperature goes down, the air is able to hold less moisture and condensation will form on cold surfaces.

Also read our blog Condensation and the NCC: What’s changed?

The first line of defense against condensation is reducing the amount of moisture by improving the ventilation. Under ideal circumstances, excess moisture will escape from the interior of the building through air vents, open windows and openings such as chimneys.

Unfortunately, natural ventilation is often reduced during cold winters because windows are kept closed. The problem can be exacerbated by the indoor activities of inhabitants such as using tumble dryers, overusing humidifiers, drying wet clothing on a rack, showering without the extractor fan on or cooking without the exhaust hood turned on. Log fires are also known to release moisture into the air.

Inadequate ventilation and condensation create the perfect environment for mould to take hold and should always be addressed. Visible condensation on walls and windows is the first sign that problems may lie ahead.

Ghost marks often appear in perfectly straight lines or well-defined blocks, indicating the location of studs, joists or even plasterboard screws in the structure. These components are naturally poor insulators, leading to the formation of corresponding cold spots in the wall or ceiling.

Condensation forms on these cold spots and air-borne particles cling to the dampness, leading to a build-up of the particles over time.

Ghost marks on ceilings often reveal gaps in the thermal envelope or insulation. Insulation is generally good in keeping the ceiling warmer than dew-point temperature (the temperature at which condensation will form on that surface). A break in the insulation may lead to a cold spot.

When ghosting appears, a thorough inspection of the insulation is recommended. If gaps are found, extra insulation should be added in these areas.

Too little moisture in the air can also contribute to dark spots forming on walls and ceilings. Dry air can increase the buildup of static electricity which will electrically charge the dust particles, making them more likely to cling to indoor surfaces. Again this may become an issue in winters when the use of heaters dry out the indoor air.

It’s a balancing act. To avoid ghosting, internal air humidity should not be too high or too low.

What causes the build-up?

It’s impossible to live completely dust-free, but there are some culprits that lead to quicker build-up of ghost marks. Indoor cigarette smoking is a big one, as is the burning of incense. 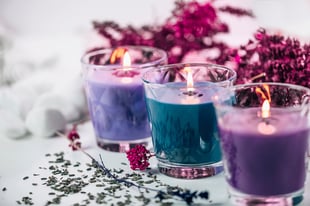 Scented candles may be innocent looking, but they are the most common cause of indoor soot besides tobacco use, especially when made of soft wax.

A logical first step in addressing ghosting is to eliminate or reduce these sources of soot in combination with improving indoor ventilation.

General cleaning, including frequent vacuuming, will help to minimise the usual household dust.

How to get rid of it

The first instinct in getting rid of ghost marks may be to cover them with paint, but that will only be a temporary fix. Before painting the walls and ceiling will need to cleaned properly and given time to dry.

Unless the root causes are addressed, the ghost marks will however reappear after time. Fixing the underlying issues can also protect the building from mould, which could be a more serious and costly problem.

To find out more about indoor mould, download the Siniat Guide to Indoor Mould.

Plasterboard
Why is joint tape important?

Plasterboard
All you wanted to know about plasterboard fixing

Plasterboard
External plasterboard ceilings: What you need to know